I was shopping the other day. As I am prone to do. I was just browsing, looking for a few things for my apartment for next year. Walking into the briskly air-conditioned store, seeking a soap dish and refuge from the 90+ degree heat and the inevitable thigh sweat it brings (there’s a mental image no one needed), I was flabbergasted by the sight of fall and even winter décor lining the aisles. 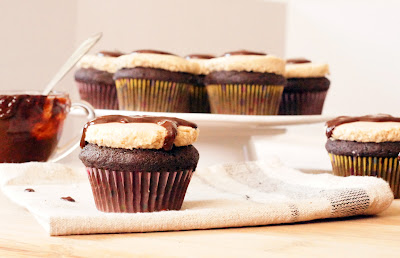 I stood there, upper lip glistening with sweat, wondering how people could be preparing for the winter months already. Wasn’t it just the 4th of July a few weeks ago? Aren’t we in the throes of our umpteenth heat wave this year? Aren’t there still beaches to go to and tan lines to acquire? 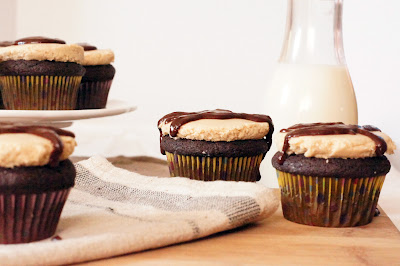 And the kicker? Majority of the summer items were marked down by 50%, if not 75% or more! While that enabled me to nab an adorable plate for mere pennies, it did leave me with a sinking feeling that the seasons will change, no matter how hard I will them not too. August will follow July and leaves will change from green to gold. The thermometer will plummet from 97 to -17 and we will all be complaining about how cold it is instead of how hot it is (part of the human condition, I suppose). 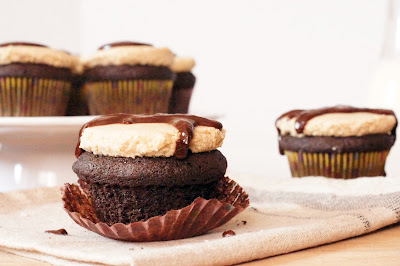 But I’ve still got time. Time for beaches and barbeques and baked goods, or any combination thereof.

Combining all three this past weekend, I created these Chocolate Barbeque Sauce Cupcakes for a friend’s birthday. Sweet and spicy, the cake is one of my favorites – dense and full of chocolate flavor. While the addition of barbeque sauce seems crazy, it’s a stroke of brilliance. The sauce serves to complement the dark chocolate while imparting a spicy aftertaste that leaves a question of “hmm…what was that?” on people’s crumb dotted lips. The creamy, sweet honey cream cheese and thick, rich brown butter brown sugar frostings compliment, without overwhelming each other, or the spiciness of the cakes. And the ganache? That's just icing on the frosting on the cupcake. 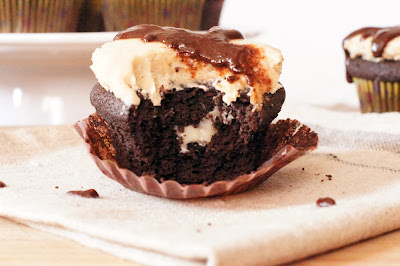 ½ cup half and half

Cream together butter and sugar until fluffy. Add eggs, one at a time, and mix until pale and fluffy, scraping the bowl as necessary. Add in vanilla. Stir in barbeque sauce until fully incorporated.

Add the flour in three batches, alternating with two additions of half and half. Do not add the half and half until the flour is fully mixed in and no streaks of dry ingredients are visible. Scrape down bowl as necessary.
Fill prepared muffin tins ¾ full with batter and bake in preheated oven 20 – 23 minutes, or until tops are set and spring back when lightly touched.

Remove from oven and allow to cool on wire rack completely before stuffing and frosting.

½ cup half and half, divided

In a medium sauce pan, melt 8 tablespoons of the butter over medium heat. Once butter is melted begin swirling pan until the butter froths and bubbles. Keep moving the butter until it begins to smell nutty and like caramel, about 5 minutes. When bubbles begin to turn brown or dissipate and flecks of browned butter bits are visible, add remaining butter and brown sugar and whisk until smooth, about 2 minutes. Allow to boil until thick, another 2 minutes. Remove pan from heat and add in ¼ cup of the half and half, whisking vigorously until combined. Cool until just warm to the touch, about 20 – 30 minutes, before pouring into bowl of an electric mixer. Add vanilla and 2 cups of powdered sugar to cooled butter and slowly mix until combined. If necessary, add the remaining 1 cup powdered sugar and/or  ¼ cup half and half, in tablespoon increments, until frosting reaches desired consistency. Top stuffed cupcakes with frosting.

Cream together cream cheese and butter until light and fluffy. Add vanilla, honey, and powdered sugar and mix until smooth.

To stuff cupcakes*:
Hold a small paring knife at a 45 degree angle and cut a circle in the top of each cupcake. The angle of the knife should create a cone shape that can be removed from the cupcake. Remove said cone of cake and cut the tip off, so that all is remaining is a flat top of cupcake. Fill hole in cupcake with small amount of cream cheese frosting. Replace cupcake top. Frost with Brown Butter Brown Sugar Frosting.

*I don’t pretend to be an expert at cupcake stuffing, I’ve done it many times in the past but I always go with Nicole’s tutorial – it’s the best I’ve seen yet.

2 TBSP half and half

Combine ingredients in saucepan over medium-low heat and stir until chocolate is completely melted, smooth and glossy. Drizzle over frosted cupcakes. 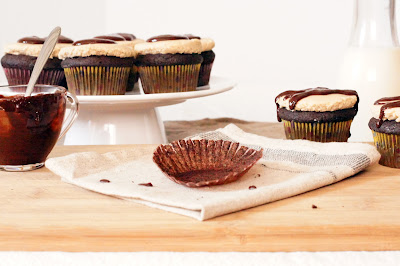 And now there’s frosting inside a cupcake inside my tummy.